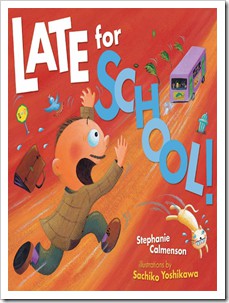 Let me tell you a story about not listening to your inner voice. A story about looking at the clock in the morning and convincing yourself that you can stay in bed a little longer, despite your sleepy inside voice shouting at you: YOU HAVE TO DO THE SCHOOL RUN IN HALF AN HOUR. GET OUT OF BED NOW.

Actually, I was calm for about the first five minutes, I was like a machine. Pouring cereal, making sandwiches, barking instructions at my kids and stuffing readers into my eldest girl’s school bag. Every time one of the kids’ ignored my demands I’d yell: “Mummy’s in her pyjamas and I’m not afraid to take you to school wearing them”.

Time was speeding by. I was dressing three children at once, keeping one eye on the clock, thinking frantically how we were not going to make it. Then my husband called, he’d been away for work. As I ran to the phone I yelled: “Fucking Twiggy”. As I garbled into the phone, that his timing was crap and no, I did not give a shit that Darwin was amazing and that I’d call him later, I could hear the two eldest girls mimicking me: “Fucking Twiggy, fucking Twiggy” and giggling. I had no time to tell them that they should at least call him Dad.

I was now officially in time saver mode and I needed to make up time somewhere.

I rushed to the loo and decided it would save me time to not pull my pj pants up. With my pants around my ankles I shuffled around the kitchen, put Miss L’s hair in a pony tail, warmed a bottle of milk for Miss H and wiped the breakfast off Miss E’s top, before sculling a cup of scolding tea, all with my arse hanging out.  No longer able to run to my room to get dressed, I stumbled down the hallway, stopping to wobble my bottom at my kids, this time threatening to do the school run pant-less if they didn’t put their shoes on.

Finally, I put some mismatched clothes on, threw two of the kids into the double pram, pushed Miss L out the door, grabbed her school bag and the accompanying “Leo the Lion”- her class’ mascot. Leo is a soft toy that spends a night at each kid’s house so they can rub their own snot into his grimy fur and dribble on him while they sleep. He is a lesson in filth.

We sped out the door – me like a crazy woman, hair flying everywhere, screaming and flailing my arms around. We made it just as the school bell rang. And yes, I’d remembered to pull my pants up.

Do you always push the snooze button in the morning even though you know you will be rushing?

The Westfield Give Ability Day Event