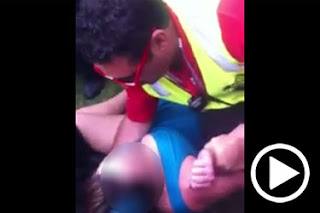 (this is a still photograph. I refuse to put the video on my site)

There’s an amateur video doing the rounds, showing a young woman supposedly drunk stumbling all over the place at the Melbourne Cup. She starts lashing out at people and, mainly punching the air, she repeatedly trips flashing her lady region to the crowd. Thanks to some dickhead with a phone, the whole world has now seen it.

I am not going to go on about drinking responsibly. I am not going to discuss claims by the woman that she was drugged, although I will say I was drugged in Spain once and I looked a lot like she did in that vision. I was not punching people though, I was stumble dancing. I was later violently mugged.

What I want to talk about is the reaction of the crowd. When I see a person in trouble, which she quite obviously was, my first reaction would be to get help. I would not get my phone out and film the person. Where were her friends? What’s happened to the code of getting shit faced? You know the one that states if your friend is falling all over the place, obviously not in a fit state to be in public, that you at least attempt to call someone to come and get her or you put her in a cab or you sit with her, in a less public place, with a bottle of water.

Where’s the fucking compassion? Why is your first thought to grab your phone and post it online? Why is your first thought to laugh and point and jeer? I’m all for owning your behaviour, and her behaviour was abhorrent, but so is being surrounded by a group of drunk men, cheering and screaming at you, while you’re in an obviously paralytic or drugged state. What if they were in the same position?

Why is much of the discussion centred on her behaviour and not about the people watching her, who did nothing to step in and guide her to a safe place? Aside from the one man who “gently” pinned her to the ground, before security guards escorted her away.

I have certainly been that drunk before. I know many people who have stumbled over in public, legs spread in the air. Or fallen asleep in a pub’s toilet or got into a scuffle. Luckily for me, I’ve always had someone to step in and get me home safely. And I have spent many hours helping friends and strangers off toilet floors.

The morning after guilt, the memory lapses and the shame is enough to give you a wake up call. Maybe only for a short time, but it definitely impacts on you. And when you’re ready to listen to your inner voice you change your drinking habits.

I am lucky to have woken in my bed or on a couch at a friend’s house or, at times, in someone else’s bed, but I was always safe. I may have behaved questionably, but I was safe.

At the moment, there’s an advertisement on SA television warning young women about irresponsible drinking. It shows a girl riding the porcelain bus in a nightclub. In the commercial, some girls come in and point and laugh at the young woman, who is passed out and covered in vomit. One girl says how she can’t wait to tell the people at her work. Another girl nudges her leg with her foot to see if she’s awake. Instead of asking if the girl is ok, they comment on how disgusting she is. It offends me on so many levels.

I gather the advertisement is meant to shame people out of getting that drunk. In doing so, it also promotes the pack mentality of point and shame. It promotes the ethos that, it’s ok to not only laugh at someone in trouble, it’s also ok to walk away. To do nothing. It makes me sad for my girls who may one day find themselves in a similar situation.

I’d like to see an advertisement where the message is if you see someone in distress get help. Never leave them alone. Never walk away. And for fucks sake, never get out your mobile phone and video them at their most vulnerable.

What are your thoughts?

The Case of the Noisy Sex

The Big Brother of Custody Battles