They are the butt of many jokes. They are massive and shiny and sit proudly in the centre of our city. They are the Mall’s Balls. 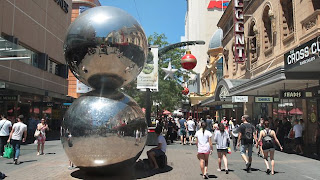 They are the meeting place for many. They act as a beacon for tourists. A gathering place for teenagers, buskers and people with kids eager to distract them. That’s right people – Adelaide has huge balls.

As I write this, they rest smack bang in the centre of the city’s main shopping thoroughfare, but alas a decision by the Adelaide City Council last night is going to change all that. They are now going to be moved three metres to the side as part of a $30 million redevelopment of Rundle Mall. This is despite a City Councillor and the Mall’s Balls creator arguing their movement will wreck the “symmetry of the strip”. About 5,000 people also signed a petition calling for the balls to be left untouched. Their catch cry I presume was “Don’t touch our balls”.

Seriously, how much time and money has been wasted to come to this decision? And how much will it cost to move them? And why pay a design company so much friggin’ money if they can’t come up with a design which fits snugly around the balls? It couldn’t be that hard? I’m pretty sure the money pumped into this whole ball kerfuffle could have been used elsewhere in the city – you know like housing for the homeless or something. Instead, as per usual, our public officials waste a ridiculous amount of someone else’s money just so they can manhandle our balls. Next they’ll try and shift the pigs. 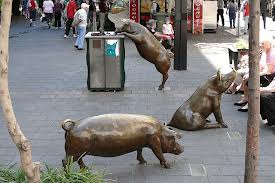 Yes, that’s right we have pig statues foraging in bins. It says a lot about some of the people running our city. Noses in troughs and all that.

So, when you’re next in Adelaide give our balls a big rub, have a ride on our pigs and think of the money that goes into improvident pursuits rather than being used for good.

It’s all ballshit to me.

The Biggest Tantrum Ever