The Week of Woe Is Me 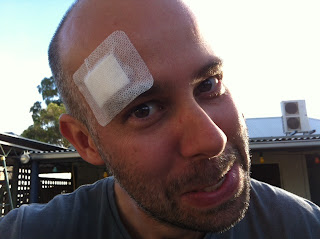 Ever since the accident I’ve taken to carrying a texta in my pocket just in case my husband falls asleep sitting up. I’m ready to pounce. You see, he cut his head on a piece of rusty corrugated iron, when knocking down an outhouse in our backyard. I’m pretty sure the heritage karma police stepped in to teach him a lesson for trashing a piece of our local history, but no-one uses the shitter anyway and frankly, it’s just in the way.

Now, he has a scar the shape of a backwards C on his head. He is now terrified his wife, me, will draw the letters “UNT” or “OCK” alongside it so when he looks in the mirror he’s constantly reminded of my love for him.

I don’t like letting him down. Ever since I left a rat’s tail, similar to a Hari Krishna’s, while shaving his head, he has been wary of my special surprise gifts of love. That time, it took a call from his boss to tell me I was a legend, for me to realise my relationship was in jeapordy. This time, if I choose to draw on his head, I hope he sees it in the mirror before I get a call from our kid’s teacher complaining of inappropriate language during the school run.

I’ve had to give myself something to keep interested in life after what’s been an excruciating week at home suffering tonsillitis. This was a surprise to me as I got my tonsils out when I was a child. Who knew they grow back? I am living proof they do and they hurt like the burning pits of hell when angry. *Insert joke about them being like talkback listeners, Derryn Hinch, blowies and being too scared to swallow here* I didn’t eat for four days.

Yesterday, I left the house for the first time in a week, to go to the supermarket. I don’t know what’s worse, the fact I chose to mark the occasion with grocery shopping or … who am I kidding? There is no or in that statement. I’ll have to think bigger with my next excursion. Perhaps I’ll go to the park to push my three kids on the two godforsaken swings *insert fighting over the swings and me screaming here* or maybe a trip to Bunnings with my husband and his backwards C-shaped scar and the accompanying pair of boobs drawn on his head.

*Insert question prompting you to comment on my blog here*

The Slide and Other Manoeuvres

The Things I Do