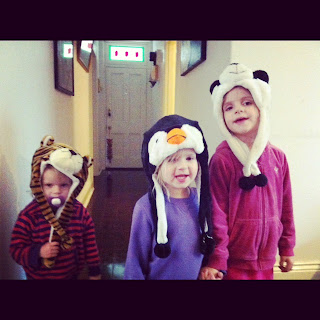 Miss 5: “OK, you’re a unicorn and can’t walk so you have to use a wheelchair.”
Miss 3: *slides into the room on her belly*
MIss 5: “No, that’s not right come with me”.
Miss 5: *comes back into room dragging a blanket with Miss 3 perched on a tiny pink chair*

Lately the stories and songs have become a little more macabre than usual. There’s a lot of death.

Then there’s the often played-out storyline.

Miss 5: “OK, you’re a dog and I’m a cat and I’m your Mum and you’re just lying there dead and then I want to go to the shops so you’re not dead anymore.”

I don’t think we’ve even talked to the kids about death, so I can only imagine they are hearing about it on television or at school. We’ve banned the “die song” and the “drown song”. They think it’s funny, they don’t get the finality. I hope they don’t have to for a long time.

Do your kids make up elaborate stories? Do they play dead in their stories? How do you react?