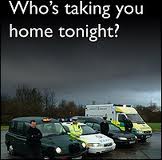 There are ten people who will not be spending time with family and friends this holiday season. They were killed in two car accidents last weekend. Ten people in just one weekend.

Last year, 1,291 people died on our nation’s roads. Drivers, passengers, cyclists, motor cyclists and pedestrians. They all went out and never came home.

Speed, seat belts, alcohol, drugs and reckless driving were major factors in many of those accidents. People driving without enough sleep. People overestimating their own abilities, fuelled by ego and stupidity. Cars that are simply too powerful. Many young men who are not scared of death. Many young men who will never know what life is all about because they are now dead, leaving their families to live for them. Families torn apart by selfishness.

When I was younger I traveled in cars driven way too fast. I traveled in cars being driven by people who did not have car licences. I’ve never driven a car drunk, but in my past I’ve driven stoned many times. Trust me I didn’t drive fast. I didn’t even drive the speed limit. It was bloody stupid. I wouldn’t do it now.

Advertising campaigns are more graphic. Speed limits, on average, are lowering. Seat belts are being worn by more people. Yet, still too many people are dying on our roads. Last Xmas period, there were 49 deaths. Soon the countdown will begin again. I remember working as a journalist over the holiday season and every time I wrote a story about a road fatality, I’d have to include the national road toll statistic. I think it was highlighted to try and scare people into driving safely, yet still road accidents kept happening. Single vehicle accidents on long stretches of straight road, cars traveling in opposite directions colliding on freeways, the horror continues.

On the weekend, four young people, waiting in a stationary vehicle for a tow truck, died when another car slammed into them. The driver of the other car also died. The accident left a baby orphaned.

With every fatal car crash there are emergency services crews, police, hospital staff, reporters and witnesses all impacted. There are friends left behind. Families shattered. And there are lives not lived. Lives that mean everything.

I don’t have the answers, but I know more needs to be done to tackle this devastation. What other people do on the roads terrifies me. I fear my not only my own family’s safety, but for the safety of others. I worry about my kids when they grow up and stand in solidarity with the other parents who spend nights worrying about their own children. Getting from A-to-B should not end in death.

To have 10 people die on one weekend should not be buried. We should be outraged.

This Week I’m Grateful For An End to the Torture