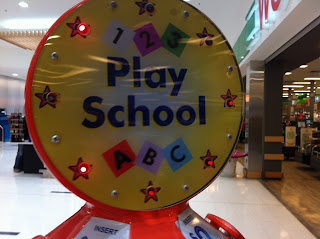 At our local shopping centre is one of those rides you put your kids on when you need a minute to eat the Mars Bar you snuck into the shopping trolley. It’s Playschool-themed and the kids always fight over who’s going to ride Jemima. At the end of the ride, which costs about gazillion dollars, a woman’s voice pipes up with: “Next time you’re at the supermarket ask your Mum for another ride”.

It annoys the hell out of me for a number of reasons. Firstly, our kids never knew it actually worked until some other stupid person broke Parenting Rule 101 by actually putting money in it. Secondly, I would have to remortgage my house to afford for my kids to go on the ride every time I took them shopping. Thirdly, it makes the assumption that Mums are the only people in the household to do the grocery shopping. And lastly, a woman recorded that message and she should know better.

How are we as a gender expected to break down parenting stereotypes if we continue to actively perpetuate them? And anyway, families are no longer just solely a Mum, Dad, 2.5 kids and a dog – times have changed people.

I understand that there are many women who do the lion share of domestic chores in their homes. There are also many households where the painfully boring running of the house is equally shared among the sexes. On average, I’d hazard a guess that many households have moved on from the 1950s stereotype and those that have not, would like to.

I know for a fact that my husband never cleans the toilet and I rarely take the garbage out or mow the lawn, but we are not a house divided by defined gender roles. We both work. We both clean. We both do the school run. We both change nappies. My husband watches the majority of cooking shows in our home and, because of that, does the majority of the cooking. I don’t earn as much as him so, because of that, I do a majority of child wrangling. I also have the bigger boobs so I did the breast-feeding. Neither of us like watching sport and both us like to drink beer. Choices made purely on economics and ability. Choices being the key word in that sentence.

So, when sweeping statements about parenting are made we are both equally horrified, particularly ones aimed purely at women, by women. It annoys me because much has been done to try and break down the stereotypes and I think women have a responsibility to stop referring to outdated gender roles.

The other morning as we watched a national breakfast news show a female health professional was discussing the merits of packing healthy lunch boxes. My husband’s ears pricked up because he packs the majority of lunches in our house. I switched off immediately because when I find myself faced with the task of lunch boxes I immediately hand over five bucks to my eldest so she can get a lunch order from the canteen. At the conclusion of the segment, the woman said: “Hopefully this will help the Mums out there.” Why? Why did she go and do that for? Why didn’t she say parents? I know it’s an extra syllable, but c’mon get with the programme. Families have evolved.

Get Your Mo On

One Thing To Say Today

The Westfield Give Ability Day