The Smell of Fish

This morning I was seriously contemplating leaving my family and escaping to a tiny fishing village off the coast of Italy. Let’s not forget I don’t know how to speak Italian, am not too keen on the smell of fish guts and don’t actually have the money to flee my family, but far out when are school holidays going to end?

You see, Twiggy and I made the executive decision to book our youngest girl in to get her tonsils out during the school break as we thought it would be easy to be confined in the house with three children. Idiots.

This is her trying to escape the hospital. 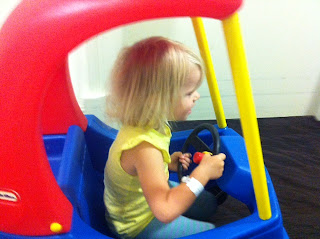 She was not successful. 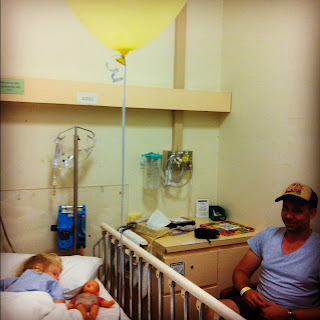 When the anaesthetist was prepping us for the operation he forewarned she may be very grumpy after the procedure. Oh, how we laughed: “As opposed to her normal cantankerous self?” He replied they were only taking her tonsils out, not giving her a sunnier disposition. Actually, he didn’t say that, I made that up, but he did remark knowingly: “Third child. We have one of THEM too.” And then he laughed and laughed.

Anyway, she was extremely brave. Was eating chicken crisps the day after the operation and is now refusing all medicinal relief. She is also back to her normal grumpy self, which is a big relief. Hooray!

Meanwhile, Miss 4 thought she’d get into the spirit and when refused her 1,000th bandaid for the day, decided to make her own. 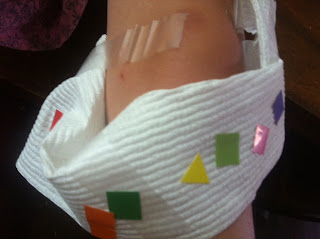 As it was attached with sticky tape to her leg it wasn’t particularly secure. She spent the best part of an hour waddling around before ripping it off and stashing it in the abyss under her bed.

The trapped feeling which goes along with having “patients” in the house started to gnaw at me, so I did a couple of things. First, I purchased a “frog cake” which looks remarkably like a penis. 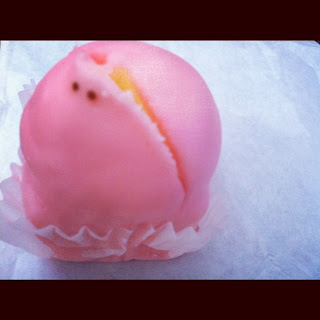 Second, I let Miss 2.5 cram toys down my cleavage. At first it was funny… 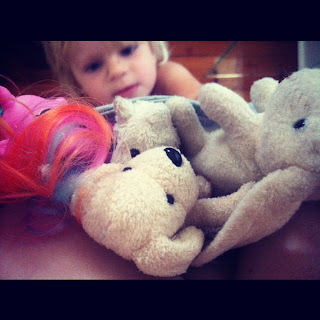 …then it got plain ridiculous. 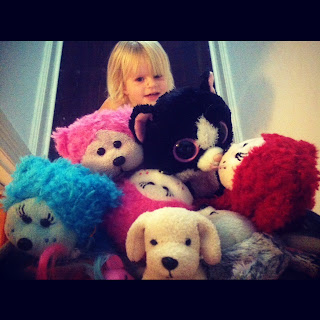 And finally, I whisked the two eldest girls off to the movies to eat our combined weight in popcorn. 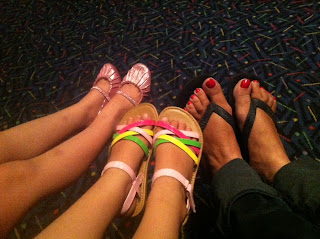 As stupid as it sounds, the quiet of cinema gave me some respite from the claustrophobic never-ending LOUD of my house.

So, as I lay on my makeshift bed on the floor in the lounge room this morning, I dared not move in fear of waking anyone up. It was silent in my home for the first time in weeks. With the sun not setting until late in the night, the kids demanding non-stop entertainment from the moment their eyes spring open in the early mornings, a child convalescing and two adults trying to grab moments of relief from what has been a busy work year – there is nothing relaxing about this so-called break.

Can you blame me for looking at short-term rentals in Italian fishing villages? I’ll learn to love the smell of fish.

Newspapers Are Being Put To Bed