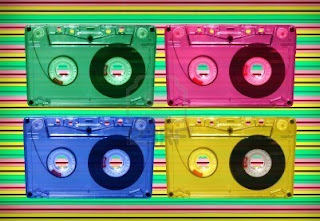 I remember it well. I had searched for ages for the perfect outfit. I only had $30, a mixture of money I’d saved and money I’d taken from my Mum’s often empty purse. I was going to our school disco. It was 1988. I was in Year 10.

I settled for a yellow top from Cherry Lane. Yellow fluoro, of course. I did something strange to my hair too, but not as ridiculous as a mate of mine who got bored plating her hair so had one half straight and the other half frizzy. We really thought we were quite cool.

On the way to school we smoked cigarettes, because that’s what you did when you were cool like us. We also drank wine from paper bags. We hid behind trees when cars went past, in case we got caught by a teacher or parent. The journey was more fun than the destination in those days.

Most of the night we danced. We had all the moves. We had our bags in a pile at our feet and we danced around them. We also giggled. And flicked our hair. Girls at that age giggled and flicked their hair a lot. The stoned ones giggled even more. And when we weren’t giggling and dancing, we were singing, particularly when such lyrics as: “You give me head (suck), you give me head” and “Am I ever gonna see your face again? (No, way get fucked fuck off)” blared through the tinny speakers. This was then followed by even more giggling and hair flicking.

Some people pashed someone they didn’t want to pash and spent the rest of the night trying to escape them. If they were lucky (or easy) they pashed more than one person.

I remember I pashed someone I’d wanted to pash for forever (which is about a week in teenage time).

I remember being terrified. I was a late bloomer compared to some of my friends. I hadn’t done much, if any pashing. I definitely hadn’t kissed someone so cool in such a public place, with friends looking on. Nor had I kissed someone with the urgency of having to get it over with very fast, in case a teacher caught us and shone a torch in a face.

I remember leaning my face close to his. My heart was thumping out of my chest. My hands were a little sweaty. I remember thinking I had no idea what I was meant to be doing. The reality of kissing my pillow and hand was nothing when actual lips were pressed against mine and someone’s tongue was darting around all over the place. There was nothing great about it. I just wanted it over with. I was mortified. I was so embarrassed. I couldn’t escape fast enough.

I did not want to do any more kissing. I made my excuses. I went back to the dance floor. I tried to push the recurring thoughts of teeth clashing, my jaw clicking and his hands around my back pushing  me closer to him. I was grossed out. I knew I hadn’t done it right and decided right then I wouldn’t be pashing anyone else for awhile.

Tonight, my eldest girl is going to her first school disco. There will be no pashing. I know that for a fact. But she is excited and nervous. She has picked out her outfit and tells me to shush when I ask her who else will be going.

She is still a little girl who can go to her disco free of sexual tension and insecurities which will factor majorly in her older years. I know this because firstly, she is only 5 years old, and secondly, she was quite thrilled when I jokingly told her I was going to be performing a hip hop dance act for all of her friends. What a difference a few years will make.

Do you remember your first proper pash?