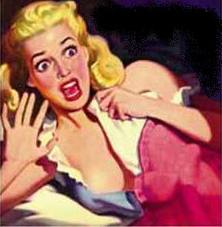 I”ve been competing in the NYC Flash Fiction Short Story Competition and recently found out I was one of 100 writers shortlisted through to the 2nd round. I was so excited and eagerly waited for my next challenge. Then it was emailed to me and I was instantly not so excited. I had to write a horror story, set in a private school, with a mouse popping up within the 1,000 words. Horror is not my strong suit. I gave it my best shot.

Here it is. WARNING: This story contains some graphic images and A LOT of bad horror writing.

Parent Teacher Night
Julie ran her hands through her long blonde hair, adjusted the collar of her silk shirt and applied some red lipstick. With her husband, Steve, away for work, she was attending her first parent teacher night alone. Their son, Ben, was struggling with his grades at his new private school. The Grange was the best science school in the country and they’d moved to Melbourne so he could pursue his dream to become a doctor. The cricket scholarship was his lifeline, but while he was performing on the field, his grades were slipping. Now, she had to plead her son’s case with his biology teacher.
She crossed the parking lot and made her way towards the science labs. The school grounds were imposing. Full of history and tradition, she could feel the expectation of excellence bearing down on her. The night heat was stifling. Julie pushed open the door and stepped into the starkly lit laboratory. Except for a white mouse scurrying on its tiny spinning wheel, trapped inside its cage, she was alone.
‘Hello,’ she called out, before taking a seat. ‘Hello, Mr Tanner?’
‘Mrs Cotton, you’re here,’ replied Danny Tanner, strolling casually into the room. ‘I was worried you weren’t going to make it. You are 15 minutes late.’
‘Oh, am I? I’m so sorry. I’m sure the appointment was 6.30pm.’
‘No, 6.15pm, but judging by your son’s inability to also read watches, I’m not surprised you’re late,’ he smirked.
Julie shifted in her seat, suddenly she felt uneasy. There was something very familiar about this man, but she couldn’t put her finger on it. ‘I just want this to be over with so I can get out of here,’ she thought to herself.
As the interview ended, Danny got up from his chair and walked towards her. ‘You don’t remember me do No doubt, free-credits-report.com ’s and debts predate money. you?’ he asked smiling. He swept his greying hair out of his eyes and pushed his black-rimmed glasses back onto his angular nose. He was a slight, yet fit man, his age hard to decipher. ‘I was your friend at school in Adelaide, but I had to leave after my parents died. Remember? I’ve often wondered where you ended up, Julie.’ He reached forward and touched her arm.
She froze. He watched as recognition washed over her. ‘But, Danny, your last name, it’s different,’ she whispered.
‘My foster parents adopted me and I thought it best I turn my back on my past. Nobody wants to associate with someone whose parents were bludgeoned to death, do they? Not even you, Julie. You were my only friend and then you stopped speaking to me. How could you have been so cruel? I’ve been planning this meeting for a long time. I’ve missed you Julie, but you hurt me. And now I am going to hurt you.’
Julie stood up from her chair and backed towards the door. ‘Danny, I’m sorry, so sorry, trust me I really am. My parents decided it was best we moved, after you went away. They wouldn’t let me take your phone calls. I swear it was their decision, not mine. I am very sorry about what happened, but look at you now – you’re a successful teacher in a prestigious school. Please, just let me go and we’ll forget this ever happened.‘
She walked quickly to the door, her heart thumping in her chest. She could feel him watching her and she started to move faster. He lunged and grabbed her wrist, pulling her close to him. She could smell his sweat. His eyes pierced her. Instinctively, she kicked his shin and pushed him to the ground and made a run for it.
‘You bitch,’ he shouted. ‘I will fucking kill you. I’ll kill you, like I killed them. Did you hear me Julie? I despised them. I got an axe and I bashed them with it until I couldn’t see their smug faces anymore. You can run Julie, but I will hunt you down.’
Julie screamed and ran faster. She stumbled on the gravel, before she pushed herself back up. She grabbed her car keys from her bag, fumbled with the lock on her door, hurriedly jumped into her car and started driving. He ran beside the car, thumping the door with his hands, before darting off into the darkness. She was whimpering. ‘This isn’t happening to me,’ she cried to herself. Where was he? She couldn’t see him. Surely, he hadn’t given up that easily.
She called her husband on the phone, but it went straight to message bank. Screaming into the phone, she told him to call the police, she would go home, pack a bag and go to her parent’s house. Danny wouldn’t find her there.
She pulled into her driveway and ran into her house, locking the door behind her. As she stuffed clothes into her bag, she could feel her heart beating and was struggling to breathe. She was running on pure fear. She had to get out of there as quickly as possible.
There was a knock at the door. ‘Julie, Julie are you there,’ it was her friend Sarah. They had planned to go to the movies together.
‘Oh, fuck,’ thought Julie. ‘I’ve got to get her out of here.’ She grabbed her bag, ready to make a run for it and swung the door open.
‘Surprise,’ laughed Danny. He held her terrified friend’s head back by the hair and in one swift movement slashed her neck open, blood spurting everywhere.
Julie screamed and ran back into her house. She remembered her husband’s loaded gun in the safe. She didn’t want to die today.
Danny calmly closed the door behind him. ‘I will find you Julie, you will never escape me,’ he yelled. Clutching his bloodstained knife, he began hunting her down.
THE END

I don”t really like my chances at making it to the third round. Do you like horror stories?