The Case of the Noisy Sex 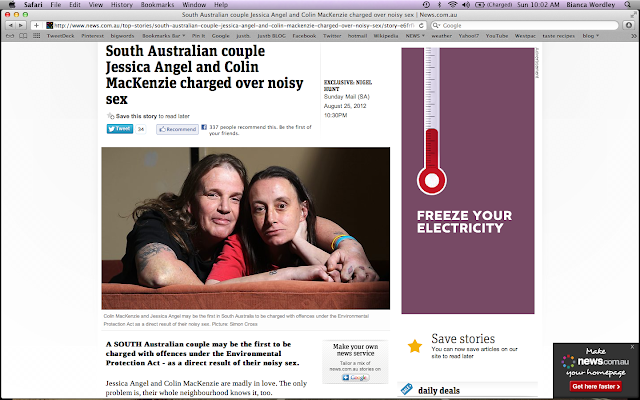 This couple loves loud sex. Very loud sex. Very loud, very frequent, like over 20 hours of it a week, sex. They are so into “it” they could possibly become South Australia’s first couple charged under the Environmental Protection Act. I gather that rollicking sexy time would come under the banner of noise pollution. Let’s just say I am sure all involved are relieved they are not also being reprimanded for another environmental nuisance – ordour forthwith.
Apparently, it is Jessie who is making most of the “noise’. She’s a screamer. There’s also swearing and loud moaning.
“It is mostly Jessie,” Colin said. “Our average sex goes anywhere from four, six, seven hours, basically five nights a week.
“That’s pretty much why I am asleep at six o’clock in the afternoon. I will probably die of a heart attack, she is almost killing me as it is.”

I’m thinking he might have to be charged with being a sex machine. Obviously, his moves in the sack are criminally good.

My hat goes off to the reporter Nigel Hunt from the Sunday Mail, for writing what I believe is his best story ever. I am betting he conducted the interview over the phone or in a nearby coffee shop, unlike the photographer who had to actually go inside their home. If I was Simon Cross I wouldn’t have sat down anywhere. I would’ve taken those photos as quick as you could say: “Wam. Bam. Thank you Ma’am”.

Meanwhile, Colin and Jessie will have to give quiet sex a go or perhaps issue headphones to their neighbours.

So, here’s my question for this fine Sunday morning. Have you ever been subjected to noisy neighbours going at it hammer and tong? Or are you the ones causing the ruckus?

Newspapers Are Being Put To Bed

The Many Faces of Ronn Moss – A Dedication

The Blog About Nothing

Welcome To My Crazy Head