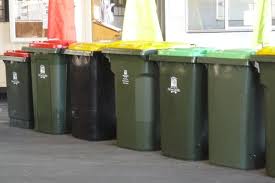 There”s a man who collects bottles in my suburb. Every fortnight he brings a ratty bag, launches head first into our recycling bin and rummages through our discarded rubbish for bottles. He avoids eye contact and I”ve never seen anyone confront him, nor have I heard him talk. Warranted he is a big man, with a bald head and an unapproachable demenaour. He lives rough. Twice now I”ve stumbled upon him in the act and ducked behind my door. I”ve stood there spying through the peep hole, my heart thumping in my chest. I”m not sure who I”m protecting – him or me. I”m certain he has built up a shell around him. I, on the other hand, am not sure what to say to someone who has his head in my bin and his arse crack sticking up in the air. I want to give a him a nod, let him know I am fine with him taking our bottles. Is there some way I could make it easier for him? Would my attitude towards him change if I found out he had a sophisticated bottle collection operation and was, in fact, not living tough? Would I feel cheated? Does it make me feel more charitable by judging him to be worse off than me? Why do I hide from him?

I need to ditch my discomfort. Regardless of his personal circumstances, I am comfortable with him picking through our waste, it”s just the predatory nature of the hunt. I think he”s resourceful. I think entrepreneurial endeavours should be supported and celebrated. I am not going to take my bottles to the recycling depot – why not him? Everyone has to make a dollar.

Bottle collectors are not a new phenomenon, but I wonder if they are noticing a downturn in trade, like other industries? It”s been a difficult 12 months for many people – high interest rates, rising unemployment, a haemorrhaging global pokies online economy and bottoming house prices. Rents are on the rise, the cost of living skyrocketing and companies are cutting costs, which in turn is, putting immense pressure on the small business sector. We”ve struggled financially and we are definitely not alone. Cask wine, Vegemite sandwiches, staycations and numerous mince meat meals have featured highly at our house. There”s been many times we”ve rummaged through coin jars to afford milk and bread until the next bill was paid by a client. And the kids” Xmas money helped put petrol in the car. Resourcefulness and frugality have ruled.

This year economists are saying the share market should go up, rather than down. Interests rates will ease a little more. Housing prices should stabilise. Hopefully, retail trade improves and petrol prices edge lower. I feel like many of us have had enough of tightening our belts, of worrying where the next dollar will come from. I, for one, am running out of ingenious ways to cook with lentils.

With the heightened financial strain has come not only desperation, but also a cheeky irreverence. My favourite is the North Carolina man who tried to pay for his $476 worth of groceries at Wal-Mart with his homemade $1 million dollar bill. He was arrested. I think he should have been awarded for his stupidity.

This brings me back to The Bottle Man. He could waste his time sitting at home thinking up get rich quick schemes or making counterfeit million dollar bills, instead he braves the elements. He gets dirty, he swallows his pride and walks the streets collecting bottles. He works harder than most and for that he should be applauded, not avoided. Next time I will look him in the eye, he deserves that. And I”m going to start putting the bottles aside for him, to make his job a little easier.

How”s your financial reality at the moment? Got any good mince or lentil recipes?

A Message For The Men Out There