It’s been a week of news block busters. Not only did we SELL OUR HOUSE, but there was a Royal wedding, Australian television’s night of nights, Osama bin Laden was killed and there was an incredibly funny interview with a disgraced football player agent. This week I have missed being a journalist. I have missed the buzz of a newsroom.

So, this week I bring you bigwords’ news observations – the Big News Week.

1) I’ll start with the one we’ve all been discussing. Yes, it is possible to look like a deer in the headlights.

And from the looks of things, Princess Beatrice is quite fond of wild life. 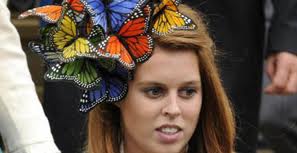 2) Ian Thorpe is English. I know, I know. I really thought he was Australian. Well, he was the last time I heard him speak. However, it seems I was wrong. He was just “putting on” that Aussie accent of his. You see, when being interviewed by Channel 7 after the “big event” I swore he sounded like he too had been educated at Eton College. I know it’s possible to pick up a little local inflection, but Thorpey you sounded like a knob.

3) And speaking of knobs, I’m so glad I didn’t get a glimpse of Ricky Nixon’s python when watching images of him cavorting around a teenage girl’s hotel room in his boxer shorts. Apparently, he was there to offer guidance and “help”. I gather he must be a man of old-fashioned values and thought it time she learnt how to separate the whites from the colours. It is the only plausible explanation I can come up with for why he was wearing no clothes. It definitely explains the white powder on the desk?

4) From one football tragic to another. Ah, Brendan Fevola. I think it’s great you are trying to get your high rolling, booze swilling, womanising, arrogant life back on track, but it was sad to hear of how much of your fortune you’ve gambled away. Your estranged wife looked quite upset about it all too. Well, I think she was upset. I have a feeling what wasn’t gambled, was injected into her forehead. Maybe you should have taken her with you to the casino, she has the perfect poker face.

5) And that brings me to the Logies. What a night of fun. A spectacle. All of Australia’s television elite in one room. There were some surprise winners, namely Karl Stefanovic. And some deserved winners like Chrissie Swan. But, my favourite winner of the night was Firass. He was so humble. I particularly loved the part when he declared his smooth love making skills in his acceptance speech. I am amazed he was wearing a white suit. I really think a mirrored suit would have been better for him, that way he could’ve looked at his own reflection when giving himself a hand job in the toilets.

6) Speaking of fashion, there were some shockers, lots of boobs, some bad hair and a lot of plastic surgeons would’ve been proud of their work. I think instead of asking celebrities who made their dress, they should be asked who redesigned their face. There was one stand-out for me though, because of her natural gorgeousness. This woman I have admired since Love My Way. I think she is stunning. Asher Keddie if you are reading this – I would turn for you. Except, I fear I may have to mud wrestle Mrs Woog for the opportunity!

7) The thought of us rolling around in the mud has naturally taken me to this week’s biggest news story – the killing of Osama bin Laden. It’s not because he was hunted down and found in a dusty, muddy looking compound. It’s the reaction to the execution of this evil individual. It’s the cheerleaders. I was feeling uneasy about the chanting and street party atmosphere, but I am not American. I did not know anyone who was killed. I can not pass judgement. But when I saw people in the crowd being thrown into the air doing cheers, like Bring It On, I almost gagged on my sandwich. At least I didn’t see see any pyramid formations. I agree it was an historic day ( with a capital “H” as one US news commentator suggested), but it was not the place for double-claps and chants: “Yay for the U, S of A. Osama is dead. Yay, yay, yay. Goooooo America”.

It was a huge news week. What stood out for you?