We like screaming at each other in confined spaces, so we often go on long drives with the three kids. On our most recent road trip, a Christmas escape, we were extra thrilled when presented with the “refusal to wear the seatbelt tantrum”.  Exhibit A. 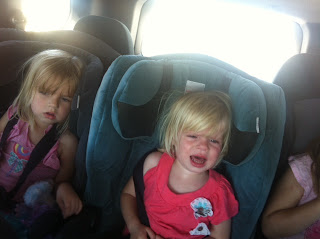 Trapped in the car with a screaming toddler and her two mortified, and also screaming, sisters was not pretty, particularly when Twiggy and I both started screaming too. It was a screamfest, I tell you. But it was the never-ending questions that really got to me.

You see, it’s a proven fact that when you get into a car with your children to go on holidays they will want to ask many questions. In fact, according to the Bigwords Institute, kids ask about 1.35 million questions per hour when on road trips. The number one question is “Are we there yet?”, quickly followed by “I’m hungry, can I have something to eat?” and the big chestnut, often asked when traveling on a single-lane freeway, “I need to do a poo. Can I go to the toilet?”.  Seasoned travellers are prepared for such questions. Snacks are within reach, electronic devises are charged and there is always a stash of loo paper in the glove box.

Our latest road trip was no exception. There were many questions. After five days, we just started making shit up just to keep them quiet. It came to a head when we were explaining to the children why the Blue Lake at Mount Gambier was lurid blue. 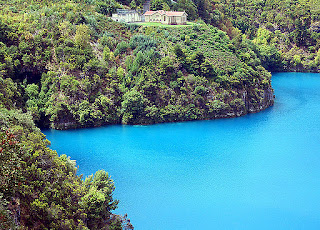 Forget the fact it is a “monomictic lake in an extinct volcanic maar” (whatever that means), we instead described in detail the settlement of the blue people from outer space who one day washed all their blue off in the lake, thus explaining why not only the lake was blue, but also the sky. See that? Two birds, one stone.

Miss 2.5 couldn’t care less, she was too busy trying to free her arms from the seatbelt. Miss 5 wanted to know if it was before or after the dinosaurs. We said it was before (whenever that was). Satisfied, she then asked for something to eat. And Miss 5, after listening intently, loudly proclaimed: “But dinosaurs aren’t real”. And there you have it folks – our job as educators of our children is done.

All I can hope is that they don’t tell their teachers that babies come out of their Mum’s boobs, because that was a very strange conversation indeed and should never be repeated.

Do you make up stories to your kids?