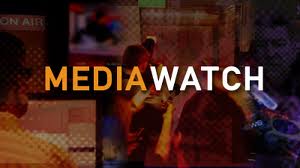 A group of women I adore featured on the segment, which, to be honest, was pretty lame. The women on it weren’t lame, their voices were as strong as ever, albeit a little chipmunk sounding. It was the show itself. The segment was much like a lesson in Mummy Blogging 101. Seriously Media Watch, you could have done much better than that. If you wanted to target a small number of bloggers, in a small slice of the blogging sector, then do your research.

I am pretty sure there are “Mummy Bloggers” out there who have not declared sponsored posts, who behave unethically. There are bad eggs in every industry. Why did you not dig a little deeper as you would the media industry? They wouldn’t have been hard to find. It would have made for much more compelling viewing and as a blogger I welcome analysis of the industry. Accountability is important.

Instead, the segment was badly researched, lacked depth and, for a show such as Media Watch, was basically lazy journalism. Not to mention condescending and lame. You could have presented a comprehensive report that the sector deserves, rather than the vacuous one you chose to air last night.

And in regards to the Mummy Blogger tag, as a woman I am sick of getting labelled based on my parental status or gender. I don’t like anyone calling me a Mummy except my children. I also don’t like the way the term, when spoken, is always in a bullshit “this is not a legitimate professional pursuit” way. There is always a raised eyebrow or a little smirk.

Traditional media is under threat because of an exodus of readers to other communication avenues. In response, advertising revenue is being cut, leading to mass redundancies and rationalisation of mastheads and television programming. On the flip side, there is whole other industry growing, buoyed by an injection of advertising dollars. Threatened much? And just like any industry pursued by women e.g: “cottage industry”, “chick lit” blah blah blah… the powers that be will denigrate it, compartmentalise it and try to make it less valued in the eyes of the consumer. Pisses me off.

What are your thoughts on this issue?

She’ll Be A Stripper Or A B-Grade Celebrity