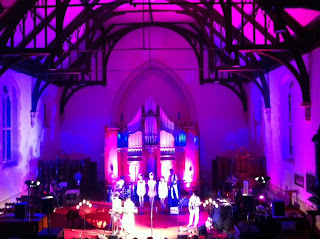 There was a time before heading out to a concert or to see a band at a pub that there’d be a pre-concert ritual. First off, there’d be much thought on what I’d wear. That was a given. I’d agonise over my “look” for the night, much the same as I do now, but my clothes were three sizes smaller and much more on trend.

Once sexed up, then there’d be the obligatory shower, hair styling and make-up session. Clothes on and then off to try out a different outfit entirely and then you’d do that mad rush to find the tickets to the show you were going to. A quick double-check to see where it was and what time. There’d be a discussion about the merits of seeing the back-up act or if the time would be best served at the nearest pub downing beers.

Then you’d sit back, crack open a coldie and roll a joint. Generally, this would be smoked on route to the venue, shared between friends. Invariably, long-necks of Pale Ale would also be shared.

Last night I went to a concert. I went to see Lisa Mitchell perform at a little Baptist Church as part of her Spiritus Tour. It wasn’t a religious experience, just a new touring concept of hers. The sound was so pure. Simply divine.

This time my pre-concert ritual was wildly different. This time, my clothes were the only ones which covered my belly and looked vaguely cool. There wasn’t a choice. And by vaguely cool, I mean in a “I checked out some hipsters at the local cafe and threw together a few items”. One of those items was a $4 scarf I purchased from Sussans and I am pretty sure Sussans is not where the cool kids shop. I am no longer cool by osmosis, I am “middle-aged woman try-hard cool” through internet research. I don’t get out of the house enough.

Up until the minute the taxi was beeping its horn, I was still doing reading with my 5-year-old. I had survived the dinner rush, got everyone in pjs, showered while the kids created pillow towers in their bedroom, greeted my mother naked at the front door, hurriedly put my hair in a failed top knot, threw make-up on and raided my kids piggy bank for cash. As I was running out the door, my eldest girl slipped and hit her head and was crying, my middle child was tugging at my leg saying: “Mum, I’ve got something to tell you…ummmm…..ummmmmm…oh, I forgot” and my youngest child was following me around making kissing sounds and staring at me with her big blue eyes. One last sweep of the room giving cuddles and I ran out of the door into the cab. And by run, I mean my bum was wobbling and I was panting.

There was no pre-concert shag and I had no joint in my pocket, but I could have pashed my friend for having a cold beer waiting for me. Concerts, sitting down, stone-cold sober are just not the same though.

Our next concert is the Hilltop Hoods. Anyone got any tips on how to look gansta?