It Takes A Village – Cate Pearce 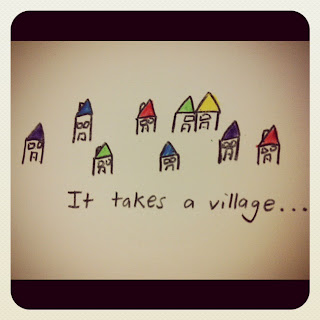 It Takes A Village… to raise a child. So, I’m asking bloggers from my village to each write a message for me to pass on to my girls. If you’d like to write one, let me know.


This week’s message to my girls is from the wonderful Cate Pearce.


Dear three littlest bigwords,
I am writing this in 2012 and the world is in turmoil.
Our country is still being, as it often has been, run by overpaid clowns, and the only man who wants to take over wears speedos. The US dollar is worth less than ours, Greece has run out of money altogether, and the most popular person on Australian television is actually a comedic radio DJ.  Dancing With The Stars may or may not be rigged, Jessica Simpson may or may not have been pregnant for 12 months, and Joel Madden may or may not have made a huge mistake when he picked hotpants over a kaftan. The Harry Potter series finished, the Twilight saga is about to end but Titanic is STILL being shown. Australian politicians tried to send refugees to a Malaysian hellhole, a jewellery store tried to sell Playboy products next to Winnie the Pooh earrings, and a clothing store in the US tried to sell crotchless knickers in children’s sizes.
Turmoil, I’m telling you.
By the time you read this, I sincerely hope that…
·       – The Voice coaches are not Justin Bieber, Jack Vidgen, One Direction and Rebecca Black. If you even know who Rebecca Black is, I truly fear history will show that Youtube was the worst plague to hit our century.
·      –  There are no Kardashians. Anywhere.
·       – You have your mother’s smile and sense of humour, but maybe not her height. Not if you want to reach the top shelf, anyway.
·       – Port Power have won a few AFL premierships and Collingwood have not.
·       – You have learned not to steal your mother’s wine. Or gin. Or anything vaguely alcoholic belonging to your mother. She needs it.
·       – Social media sites have scratch’n’sniff capabilities.  For flower photos, not, y’know, dog poo or anything.
·       – The Wiggles have finally managed to wake up Jeff.
·       – You have managed to skip King Charles’ reign and have King William and Queen Catherine on the cover of Women’s Weekly instead.
·       – Lady Ga Ga is no longer wearing dresses made of meat. I’m guessing genetically modified salads will be the rage by then.
·      –  Your first boyfriends were decent boys who treated you with the care and respect you deserve. Or they were cute and rich.
·       – The Doll Wars sees the Bratz tribe eliminated from the face of the earth.
·       – You realise all your mother can give you is an education and straight teeth, the rest is up to you.
·       – Somebody finally makes a spectacular profit on The Block.
·       – Shoe stores still have 50% off sales.
·       – Leggings are no longer worn as pants by ANYBODY.
·       – Your mother has the sense to show you what I wrote about my teenagers on my blog and says “See girls? This is what I’ll write about you if you shit me to tears.”
·       – Fashion designers and store buyers have realised that making two thousand dresses in size 6, and only four in size fourteen, means that the sales racks have one thousand, nine hundred and ninety-eight size 6 dresses left on them at the end of the season.
·       – Channel 10 has finally settled on a regular night and timeslot for Glee.
·       – Your parents have saved up for your school formals, or taken up dressmaking, shoemaking, and bought a limousine hire company.
·       – There are still real books. Made of paper.
·       – I have finished menopause.
Seriously, I also hope that…
·       – The environment is healing.
·       – The Japanese have stopped whaling.
·       – Poverty is a diminishing problem.
·       – Dignified, voluntary euthanasia is legal.
·       – Cancer has been eradicated.
·       – You never live in fear of terrorism.
·       – You find your own version of happiness.
·       – You can marry whoever you want.
·       – You laugh loud, and often.
·       – You know you are beautiful.
·       – You know what it is to love.
·       – I have finished menopause.
Love, Cate xxx

Cate was born in 1964, but as the savvy SAHM of two teenagers, has the bones of a Baby Boomer, the mind of a Generation Xer and the mouth of a Gen Y. She lives in Adelaide and writes over at I’ll Think Of A Title Later.

It Takes A Village – Domestic Goddesque

It Takes A Village – Wanderlust

It Takes A Village – WoogsWorld

It Takes A Village – An Explanation