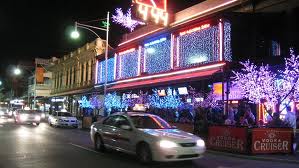 As you’d already know, my husband and I have three young girls. And because of that we spend many weekends at home talking about how we used to live such a fun, exciting life. An exciting night for us now is when the kids go to bed in their own room before 9pm. We then go crazy watching cooking and home improvement shows before going to sleep at 10am. And by sleep, I mean sleep.

Recently we’ve expanded our thrilling weekend repertoire to include the night time cruise of the pumping Adelaide city streets. We call this “a desperate grab at reclaiming our youth”, alternatively it’s known as “trying to get the girls to fall asleep”.

One such street is Hindley St, known for its cultural diversity, artistic flare and strip clubs. It’s the place all the “young people” go to drunkenly stumble in their Supre mini skirts and their leopard print stilettos. There are many flashing lights, lots of loud music and car loads of people cruising the strip. Oblivious to the undertones of the surrounding environment, the kids ask us to turn up the dance music in our car as they stare out the car windows, mouths agape. They love it.

On a recent trip, Twiggy and I were laughing about the hen’s night on a roadside balcony complete with bride-to-be holding a massive blow-up penis. The knob was bigger than her head. The kids were too busy looking at the gelato sign to notice. Stopped at the lights, we then all watched a couple sitting out the front of dodgy takeaway restaurant. It was only 9pm, but they’d obviously started drinking early, like perhaps the night before. With the coordination of a politician holding a baby, they were attempting to play the game where you clap your hands together while singing a ditty. Each time they went to high five each other they’d miss and each time they tried to sing the accompanying song they’d stuff it up. It was all pretty innocent and silly. The girls were transfixed. We were all giggling, until the guy got annoyed at their lack of ability and changed the words to the song to: “I’m going to fuck you in the cunt”.

Twiggy and I both sprung into action. The windows were immediately closed, the song on the radio turned up and we both started singing “la la la la laaaaa” while laughing a little hysterically.

And then we went home straight to bed.