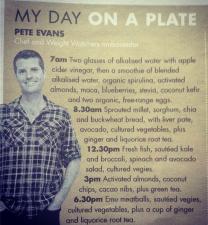 This appeared in the newspaper on the weekend. Celebrity chef Pete Evans gave readers a sneak peek into the meal plan of a super healthy, slightly wanky, obviously wealthy dude with much time on his hands. I say “time on his hands” and “obviously wealthy” because activating your almonds and making sure your veggies are cultured takes time and money (if you buy them from your local organic “gold mine” store). I say “slightly wanky” because I’ve seen him on the television and to be honest I found him to be just that, “slightly wanky”.

I take no offence to what he puts in his mouth. He’d be shocked and surprised to see what’s passed my lips over my lifetime, but it’s the condescending need to provide far too many details in his pretentious meal plan which made me gag. And seriously, why does the newspaper think we care what he eats? Isn’t there some news somewhere to fill its pages?

And anyway, why couldn’t he have just said he had a fruit smoothie and a couple of glasses of water for breakfast and what the fuck is alkalised water anyway? And if I hear the words activated and almonds in the same sentence again I am going to vomit in my mouth. What’s wrong with straight off the tree almonds? Surely fresh, raw food which hasn’t been “activated” is ok. And here’s where he really lost me – emu meatballs. I darn well hope those emus were free range. I hope they were fed on an entirely organic vegan diet. And how many points are native animal meatballs in the Weight Watchers plan he is an Ambassador for?

I also think if you’re going to go into so much detail then it needs to apply to everything. Those avocados. Were they hand picked by virgins? The cacao nibs. Were they sourced from ethically farmed rain forests? The green tea. Was it locally grown or picked by child labour? His “Day On A Plate” left me with so many questions.

Did he wash it all down with a glass of STFU? Or did the liquorice root tea numb him into submission? Well, clearly not, because he agreed to publicise this obnoxious meal plan.

But this is where I must put my own culinary ignorance aside. This is where I must put aside my own purely shallow view of the man aside. The shellacking he got on the interwebs was pretty harsh. I can’t   excuse myself from that behaviour, I couldn’t help myself. Culinary wankery makes me lash out. He was a sitting duck. The more I enjoyed the mockery, the more I actually started feeling a little dirty. At some stage during the quick witted twitter and Facebook feeds, I began to feel queasy.

No matter how “slightly wanky” his menu plan and how at odds with the “average Joe”, it’s his choice to eat those things. It’s not really my place to take the piss out of him, even if he put it out there for all to see. Even if the whole concept of cultured vegetables gives me a vision of carrots sitting around in berets reading Tolstoy and listening to Miles Davis.

Social media is quick to judge. The pack mentality can be a little vicious. And I’m not proud of my involvement in that.

This is his response to the criticism.

IGNORANCE is not bliss!
I’m occasionally ridiculed because I choose to eat a nutrient dense diet, and I find it so bizarre as to why people sometimes find my food choice’s so offensive? All I know is that I’m well aware of the consequences of eating ‘dead’ food, and also I’m a father, and I take that privilege very seriously, so for me striving for optimum health whenever I can so that I can be a responsible role model for my daughters, and still be able to surf right up until the end, is the obvious choice for me.”

Fair enough. Ignorance is not bliss. I’d be the first to put my hand up to say: “What is dead food?”.
But, despite my criticism of your life choices, Pete Evans I apologise. The locally grown, ethically sourced, organic, carob-coated, activated almonds are in the mail.

Are we too quick to judge or did he put himself in the firing line?